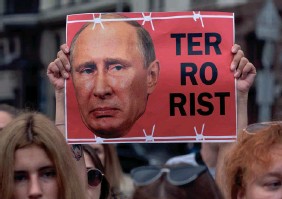 KYIV, Ukraine (AP) — Relatives of prisoners of war captured by the Russians following the fall of Mariupol gathered Thursday in central Kyiv demanding information about their husbands, fathers and sons following a strike on a prison housing POWs in a separatist region of eastern Ukraine last week that reportedly killed and wounded dozens. One of those gathered was Eugenia Vasylieva who last saw her husband Valeriy Vasyliev in Mariupol on the night of Feb. 24, the day of Russia’s invasion of Ukraine. That night he went to defend his city. Her 7-year-old daughter Zlata Vasylieva, holding a placard calling for her father’s return, said: “I want my dad to be alive and that he never die.” Russia has claimed Ukraine’s military used U.S.-supplied rocket launchers to strike the prison in Olenivka, a settlement controlled by the Moscow-backed Donetsk People’s Republic. The Ukrainian military denied making any rocket or artillery strikes in Olenivka. The intelligence arm of the Ukrainian defense ministry claimed in a statement Wednesday to have evidence that local Kremlin-backed separatists colluded with the Russian FSB, the KGB’s main successor agency, and mercenary group Wagner to mine the barrack before “using a flammable substance, which led to the rapid spread of fire in the room.” The ex-commander of the Ukrainian national guard’s Azov Regiment, Maksym Zhorin, told the AP there were around 1,500 defenders of Mariupol in Olenivka before the explosion. They were part of 2,400 soldiers from the Azov Regiment and other military units defending Mariupol who surrendered under orders from Ukraine’s military in May. “But there were 100-150 people in the facility that was blown up,” Zhorin said. He said the conditions in the block where the prisoners of war were being held were not suitable for living. The facility was not located next to the other barracks but on the outskirts of the prison near the warehouses. U.S. officials believe Russia is working to fabricate evidence concerning the strike. U.S. intelligence officials have determined Russia is looking to plant false evidence to make it appear Ukrainian forces were responsible for the July 29 attack on the prison, which left 53 dead and wounded dozens more, a U.S. official familiar with the intelligence finding told the Associated Press on Wednesday.