Playing for a powerhouse

Addison says move to USC was only about football 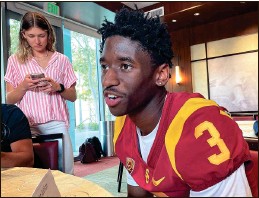 LOS ANGELES (AP) — Jordan Addison said he didn’t know Southern California was the school for him until the moment he set foot on campus for his recruiting visit shortly after entering the transfer portal in May. And the Biletnikoff Award-winning receiver said anybody who thinks his decision was about anything but football really doesn’t know him at all. Addison realizes he left behind hurt feelings at Pitt, where he was the nation’s most prolific receiver last season while catching 100 passes for 1,593 yards and 17 TDs. Panthers coach Pat Narduzzi has strongly suggested star players like Addison have been swayed by huge name, image and likeness deals at higher-profile schools like USC. Addison said there’s no truth to those insinuations, and they’re disappointing. “It was definitely frustrating, but I wasn’t too concerned because the truth always comes to the light,” Addison said while wearing his new No. 3 cardinal jersey. “I know what my focus is and my intent, so all of that is just outside noise.” Addison is fitting in well with the Trojans, who are completely rebuilding a proud program from its worst season in 30 years. He’ll also play with extra motivation after the rumblings from Pitt — and more overt insults from fans on social media. “I definitely feel like I got drug through the mud a little bit with the media,” Addison said. “But I like being the underdog, and I’m always going to come out on top. I feel like it’ll be a great story at the end.” USC has put together a remarkable roster under firstyear coach Lincoln Riley while recruiting extensively through the transfer portal at the same time NIL deals are rapidly changing the sport. The conjunction has led to conflict, with veiled, anonymous accusations of tampering and unfair advantages leveled at the Trojans. Riley, Addison and other players are increasingly annoyed with the aspersions cast on their character as training camp began Friday on campus. “We’ve worked hard through our careers as coaches, my career as a coach, to do things with integrity,” Riley said last week at Pac-12 Media Day. “I think we’ve largely done that throughout my career. When someone challenges that with no facts and just only emotion, yeah, I mean, I think you take it personally. Absolutely you do.” Addison’s move might have been the biggest transfer of the college football offseason if not for the move of his new quarterback, Caleb Williams, from Oklahoma to USC. Williams and Addison are both from the Washington, D.C., area, but Addison said they were no more than vague acquaintances until he chose the Trojans. Williams’ talent has been obvious in USC’s offseason workouts, but Addison missed spring ball. He has participated in player-led practices this summer, and the Trojans are already impressed. “He’s a freak of nature,” said running back Travis Dye, a transfer from Oregon. “That man can run like a gazelle. I’m excited to go out and watch him in pads.” Addison said he hasn’t communicated with Narduzzi or former Pitt quarterback Kenny Pickett since he left. Pickett is in the NFL, and last season’s offensive coordinator and receivers coach have also left Pitt — yet Addison’s decision to try another school was still framed as a betrayal by many fans. Instead, Addison said he was attracted by the chance to play for Riley at a hopefully revitalized college powerhouse. “Just me already knowing Lincoln’s history and what he did with some great receivers, that’s No. 1,” Addison said. “And just to see how the change was going here and the rebuilding process. I’m just glad to be out here.” Addison even gets to wear his preferred No. 3 jersey after a conversation with Heisman Trophy winner Carson Palmer, who gave his blessing to unretire his former number. Addison hasn’t been to the beach or many hot spots since arriving in L.A., but he met at least one celebrity: He has worked out with Marqise Lee, the USC receiver who won the Biletnikoff in 2012 before playing for the Jacksonville Jaguars. Since he’s likely only in town for one year, Addison has told his new teammates he’ll make the most of it. “I just wanted to make sure they knew what my intention was and what my focus was going to be,” Addison said. “I wasn’t coming out here for all the lights, camera, action and all that. I just wanted to make sure they knew that I was strictly business.”