Upcoming nuptials are highlight of social calendar at Primrose 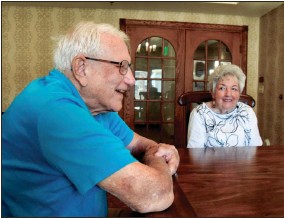 Folks at Primrose Retirement Community are calling it the social event of the year — Lola Perrey and Gerald “Jerry” Scarlett are getting married. The widowed lovebirds met in February, when Lola arrived in the community. She said she had fallen, and was required to wear a neck brace because of three broken vertebrae. She had a “huge black eye” and a big knot on her head. “I couldn’t go back home and take care of myself,” she said. Jerry claims she began to stalk him, and laughs. “I just thought, ‘Well this is a pretty nice lady here,’” he said. What Jerry calls “stalking,” Lola said was her being friendly. “He’d walk by and I’d say, ‘Hi, how are you doing?’ and he’d go on by,” she said. “And I’d repeat, ‘Well, hello?’” At “Happy Hour,” she saw Jerry sitting in the back of the room, and motioned for him to come up and sit beside her. He ignored her, she said. “Finally, I said, ‘Hey, come on down here,’” Lola said. Jerry said he finally relented and spoke with her because he thought she wanted to talk about the area around Springfield, where one of Lola’s daughters lives. “I thought she was kind of nice. That’s the way it went,” Jerry said. “One thing led to another and we sort of fell in love.” The two connected at social events within the community. Then they began going out dancing to country music every Thursday night at Windstone Entertainment. By the way, each is 88 years old. “We go there and we dance and have a nice time with that,” Jerry said. “Everybody does the line dance. I still can’t figure that out — how they do that line dance. “I do the two-step or just a shuffle. We don’t last that long on the dance floor.” Their families support their relationship, they said. Each of them has two children. A mistake, Jerry said, was getting Brandon McIntire, director of the community, involved with the wedding. Jerry said he set a date for the event on a Wednesday so residents would be around, and approached McIntire about using the Primrose chapel. Oh no, that wouldn’t do, McIntire said. “We’ve got to make it a major event,” he told Jerry. “Brandon got hold of it and turned it into the major social event of the year.” Jerry wondered if he’d be able to afford to put it all together, but McIntire assured him the community would take care of everything. “They have had fun and interesting lives. That led them here,” McIntire told the News Tribune. “They have dated for a few months now. They want to seal the deal.” McIntire, who has been involved in nursing facilities for years, added he had never had a couple meet in a retirement community like Primrose and decide to get married. So, it’s exciting for him and the staff. He has completed all necessary documents for the event. And Primrose is getting ready. “This whole thing has gotten out of control,” Jerry said with a laugh. “Some things have to be worked out yet.” Sept. 3 is fine with Jerry, he said, adding he intends to go online and find the perfect spot for a honeymoon. “The whole thing started,” Jerry said, “when we met and just got along so well together.” They were in the elevator one day, and he thought about kissing Lola. “I kissed her, and I got off the elevator, and I said to myself, ‘You idiot, you could have kissed her more times,’” Jerry said. Lola said she was left standing in the elevator, wondering why he stopped at one.